On a recent getaway to Nova Scotia, my friend, Marian, and I decided to rent bikes and explore some of the “off-road” Trans Canada Trails. The TCT are repurposed defunct rail lines that snake through parts of Canada. It’s a cool way to traverse the country while taking away the danger of biking on paved roads. I’m not a fan of biking in traffic. It makes me so anxious.

Five minutes into the trail, we were deep in the woods, with not a person in sight. Our well-worn hybrid bikes had seats that were super hard on the tushy, so I insisted that we only go 30 minutes out and 30 minutes back to prevent our precious pelvic floor from too much trauma…after all, the trail was a little gravel-ly. You could feel every bump.

I noticed a small bell on our handlebars and I started dinging it. Marian thought I was being annoying.”It’s a bear repellent”, I teased. “Or, a Moose repellent”, I added. And I dinged some more.

As we rode deeper into the woods, Marian accused me of being a drama queen.

“For someone who loves the outdoors, you sure have some issues”, she rightfully accused.

Marian didn’t realize that behind our idle biking chatter, I was having visions of getting trampled by a moose and being eaten by a hoard of wild coyotes.

About five miles out, and without seeing a soul in sight, we decided to turn around. We stopped at a clearing and took some pictures…mostly of each other taking pictures. A mile into our return, and about 20 yards ahead of us, a seven foot black bear came out of the woods and blocked the trail. We both saw it at the same time and abruptly stopped. The bear looked up at us and under my panicked breath I said, “Marian, we have to turn around”.

Without looking back, we took off like a rocket and biked away from the bear. I have to say, for us old bitches, it was Tour De France qualifying. We must have gone about two miles in the other direction when we came across a place where the trail intersected a paved road. We ran into a local on an ATV and trying to catch our breath, we told him what happened.

“Bears won’t do you no harm” he said, “but you have to watch out for the pack of wild coyotes. They ate a young girl here two years ago.”

We called the hotel and they sent two people to come get us and our bikes. The kind local stayed with us until they arrived.

Wouldn’t you know it, that the first thing everyone asked us when we got back was DID YOU GET A PICTURE?

Now that a week or so has passed, I’ve used my emerging photoshop skills to recreate what Marian and I neglected to photograph. 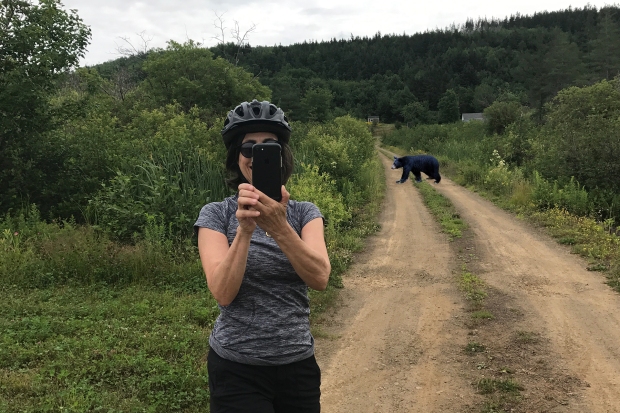 This is Marian taking a selfie.

But…because I’m a DRAMA queen, I did two other versions:

Look closely at the left.

And finally, my favorite of the trip:

Bears aren’t the only things that shit in the woods.